How Much Have Endoscope Cleaning Practices Evolved In Recent Years? 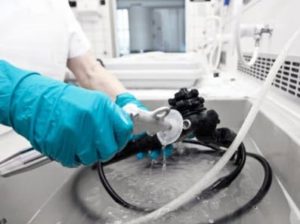 The short answer is – reprocessing processes are evolving, but not quickly enough.  This is according to a series of recent studies Ofstead & Associates, based in Minnesota.  The two studies, conducted at UPMC in Pittsburgh and another healthcare facility in the Midwest, both showed that risks of infections spread by endoscopes still exist even when reprocessing techniques are being updated.

As this article by Gordon Gibb at LawyersandSettlements.com explains:

“According to the Pittsburgh Post-Gazette (07/04/17), Ofstead conducted her first study a decade ago. Apparently, it seems, this latest effort has seen little improvement. A study of 20 endoscopes over a seven-month period was released this past January. There were visual inspections, microbial cultures and biochemical tests to detect organic matter. The research team found all scopes had irregularities (fluid, discoloration and debris), and 12 had microbial growth after cleaning. Signs of organic residue were at higher levels in the gastroscopes compared to the endoscopes used for colonoscopy.

That study was released in January. Subsequently, last month Ofstead reported on another study – this time focusing on the sterilization for flexible ureteroscopes at two large multispecialty health care facilities in the Midwest – in the American Journal of Infection Control. Despite reprocessing, all 16 ureteroscopes had visible irregularities and contamination with microbial growth, hemoglobin, protein or a chemical indicating the presence of living cells.

The study concluded that there should be regular checks of reprocessing practices, routine cleaning verification tests and visual inspections according to the accepted guidelines.

“We can’t expect the sterilization to work if we’re not absolutely certain the cleaning is working.”

When this doesn’t happen, there is an increased risk of potentially serious infection passed from one patient to another. While an endoscopic infection lawsuit may translate into just another legal headache for a manufacturer or a health care facility, for the patient the results can be tragic. Settling a medical malpractice lawsuit with the issuance of a check to a plaintiff will make the problem go away for the defendant, but for the plaintiff an infection could yield significant health consequences that could encumber a patient for the rest of their lives. No amount of money will make that go away, beyond lessening the financial burden.

The University of Pittsburgh Medical Center (UPMC) undertakes hundreds of procedures using various endoscopes and duodenoscopes each day, according to the Post-Gazette. “These scopes are a godsend to these patients…the benefit far outweighs the risks,” Dr. Raymond Pontzer, director of infection prevention at UPMC, said in published comments. The FDA says there are easily a half-million endoscopic retrograde cholangiopancreatography, or ERCP procedures in the US every year.

However – as any plaintiff bringing an endoscope negligence lawsuit can attest – cleaning and disinfecting the intricate device is not only job one, but a massive challenge.

According to the Post-Gazette, hospitals began to see infections potentially linked to transference between endoscopes and duodenoscopes about ten years ago. However, it was an outbreak of serious infections resistant to antibiotics in 2012 – the so-called superbugs – that prompted UPMC to undertake a thorough analysis and investigation of the cleaning and disinfection protocols for its scopes. Simply cleaning the scopes according to recommended procedures wasn’t enough, so UPMC implemented a sterilization process that three years later formed the basis of current recommendations brought in by the FDA in 2015.

Pontzer says that since the switch, UPMC has had no issues since. And Ofstead said her research supports recent cleaning guidelines issued by national nursing organizations representing the healthcare professionals who are on the front lines, feet on the floor and Ground Zero, dealing with these devices.

“The assertion is you should be inspecting visually with lighted magnification to see if there is a defect or contamination [on the scope],” Ofstead says. “We can’t expect the sterilization to work if we’re not absolutely certain the cleaning is working.”

But that, in itself is a challenge given that diameters of the channels within the scopes can vary: Large scopes like that for ECRP have an instrument channel of 4 millimeters. The ureteroscope channel is far narrower at 1 millimeter, the Post-Gazette reports.

Pontzer told the Post-Gazette that UPMC cleans each channel of each scope immediately after use (no bedside pre-cleaning was done in the two locations in the Ofstead ureteroscope study).

“After they have been reprocessed, before they are used again, we make a visual exam.” The visual exam before an endoscope or duodenoscope is redeployed for another patient is important, Pontzer says.

“Sometimes [there is something] overlooked. [The scopes] may not be looked at quickly enough. When they’re done being processed, they are hung out to dry. They have to be hung correctly, dried correctly. Before using [a scope], the standard process is to look at it. They’re supposed to inspect it before they utilize it.”

It is when protocols are rushed, or things are overlooked that endoscope infection winds up transferred between patients.”

While updating processes and procedures can enable a problem-free environment for endoscope reprocessing, the true danger lies in individuals or departments not closely following the updated processes exactly as designed.  Hospitals that worry about staff adherence to process updates and who want to make sure that everything is being followed as designed can turn to automation systems such as iRIScope.  These systems improve staff compliance by standardizing processes and automating many of the data collection workflows.  As the article states, “it is when protocols are rushed, or things are overlooked that endoscope infection winds up transferred between patients.”