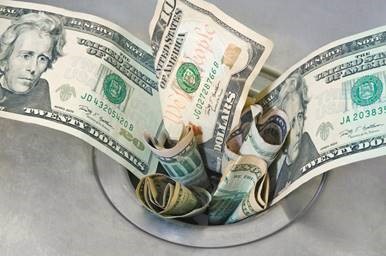 A new study published in the Journal of the American Medical Association (JAMA) estimated the annual cost of waste in the US healthcare system between $760 billion to $935 billion. The study, conducted by researchers at Humana and UPMC, looked at 54 published reports that explored the costs of waste in US healthcare.

As this article from Christopher Cheney at HealthLeaders Media summarized:

The impact of likely interventions to reduce wasteful spending are significant but limited, the researchers wrote.

“The best available evidence about the cost savings of interventions targeting waste, when scaled nationally, account for only approximately 25% of total wasteful spending. These findings highlight the challenges inherent in rapidly changing the course of a health system that accounts for more than $3.8 trillion in annual spending, 17.8% of the nation’s GDP.”

The highest amount of wasteful spending was associated with the administrative complexity category. The development and adoption of value-based payment models has the most potential to impact this category of wasteful spending, the researchers wrote.

“In value-based models, in particular those in which clinicians take on financial risk for the total cost of care of the populations they serve, many of the administrative tools used by payers to reduce waste (such as prior authorization) can be discontinued or delegated to the clinicians, reducing complexity for clinicians and aligning incentives for them to reduce waste and improve value in their clinical decision-making.”

…An editorial accompanying the new research says the findings are a significant contribution to the ongoing effort to rein in the country’s healthcare spending.

“At a time when the United States is once again mired in a great debate about the future of its healthcare system, the data reported in the article … should become part of the national discussion. It would be nearly impossible for all waste to be eliminated in any healthcare system, just as it is impossible to know the true cost of any change in the delivery and financing of healthcare without understanding possible savings, and recognizing that there is complexity in knowing the savings,” the editorial says.

Concentrating on wasteful spending is crucial, the editorial says. “While no single solution will solve the continuous increases in U.S. healthcare spending, identifying, reducing, and eliminating waste are important and appropriate places to start.”

Download a copy of the article here: Wasteful Spending in U.S. Healthcare Estimated at $760 billion to $935 billion

With so many areas to reduce waste in US healthcare, it’s hard to know where to start. Many hospitals and health systems are starting to achieve significant savings by eliminating waste in their supply chain. Making substantial improvements to supply chain spend requires powerful and accurate data about spending patterns. One place that hospitals may find immediate opportunities for reducing their costs is by better managing their implants and supplies, which make up the second biggest component of procedure costs after labor. If your organization lacks the proper tools to provide powerful data around your supply chain spend, consider systems such as iRISupply which can collect real-time data around supply and implant usage using RFID technology and provide actionable insights to help with vendor negotiations, on-hand inventory levels and owned-consigned item mix. Powerful data analytics included with the software will give specific recommendations on which items to reduce or eliminate, and which items should be owned vs. consigned, leading to millions of dollars in cost-savings opportunities. These cost-savings opportunities can help hospitals increase their margins and provide valuable dollars to the bottom line.